This year is just zooming by already; I can’t believe we’re in April.

March  wasn’t a good month, and I’m sure a lot of other people can relate to that statement. Besides the whole Coronavirus thing going on which is freaking everyone out, causing panic purchasing and forcing everyone world wide to stay home — we were hit with the flu a week before it all happened. I don’t usually have more than a 48hr flu, if even that. So the fact I was down and out for a whole week is insane. I haven’t been  that sick since I was a kid. And tbh I barely ever got sick — until I got married and had a kid. Now I feel like I’m  always sick and I fuckin hate it.

I finished The Good Place and I’m pretty bummed about it. The series finale was satisfying, although I do wish we saw what happened to Michael when he goes back. Watching everyone settle into their destiny’s was hard to watch but I had so much fun watching this series.

Finished Baby Daddy which was such a weird find for me. It was like new adult trash TV almost. I swear everyone on that show minus Riley was a freakin nympho. Poor Emma, these people aren’t the best of examples lol.

I went back to watching Keeping Up With The Kardashian’s between trying to figure out what to watch. I’m so over Kourtney’s attitude. Granted sometimes Kim and Khole take things too far and some shit is really not funny, and I heard rumors about Kourt not wanting to be on the show anymore which is fine but don’t show up and be a bitch if you don’t want to be there. I get it, you wanna focus on your kids and your family. Then again we don’t exactly know what goes on behind the scenes or in their real lives either, so. Still, Scott is my favorite Kardashian.

I also went back and restarted Fairy Tail just cause I saw Hulu had  all the seasons on there and when I left off they didn’t. I know I didn’t have to start over from the beginning but I just love this anime so much that I don’t mind. Some arc’s I don’t really care for but I refuse to skip any of them lol.

I also started a new anime which name I keep forgetting but it’s on Netflix! I recently just saw it’s on Hulu as well it’s called Love, Chunibyo & Other Delusions it’s about a girl named Rikka who loses her dad and she lives in this alternative universe where she code names everyone and she believes there’s this place that she’s searching for where her dad is still alive, she just has to find it.

I relate so hard to Rikka, I guess because I wasn’t home when my dad was getting worse and when he passed that to me sometimes I forget he’s gone, like he’s  not gone, I just haven’t spoken to him. I think it’s also why I’m a little hesitant to go home — to  see he’s not there anymore and having to face reality. The last episode of the first season tore me apart and I actually cried.

As you all know I had planned on doing Middle Grade March and while I started on 2-3 books in March I wasn’t able to finish any in time. I’m still going to go ahead and finish these into April and maybe continue on with the TBR; I need a break from YA anyway.

I did finish an audiobook for the first time in years! It was It’s Not About You by Tom Rath which focuses on what kind of legacy or imprint you want to leave behind. How things aren’t always about you, or ever really about you. It was super interesting and insightful.

Me and Tums are listening to The Mystwick School of Musicraft while she does her floor crawling/playing time. It’s free right now through a special page by Audible (which I think it’s super cool they’re doing this and that Scribd is also joining in on offering free reads while the whole world is on lockdown).

Ironically I managed to do a lot before the flu got to me and before this lock down happened;

I got to try a new Sushi place I had my eye on and it was SO good. I’m always on the search for a good Udon place and this one had a really good one. It also had the best Shrimp Shumai I’ve ever had. And I’ve had a lot of Shrimp Shumai! They also had a super interesting Sushi called Apple Roll! It was Sushi wrapped in Apple; it was so refreshing but the Apple definitely took over all the other flavors. I’m looking forward to going back there when this is all over.

It’s been a month of UberEats, DoorDash and Instacart for sure. It’s been so frustrating trying to do my weekly errands/shopping since TP and disinfectants are out and my OCD is trying to break out into an anxiety attack but I’m trying SO hard to maintain control. And just patiently waiting for all this to be done with. Or at least the panic buying. 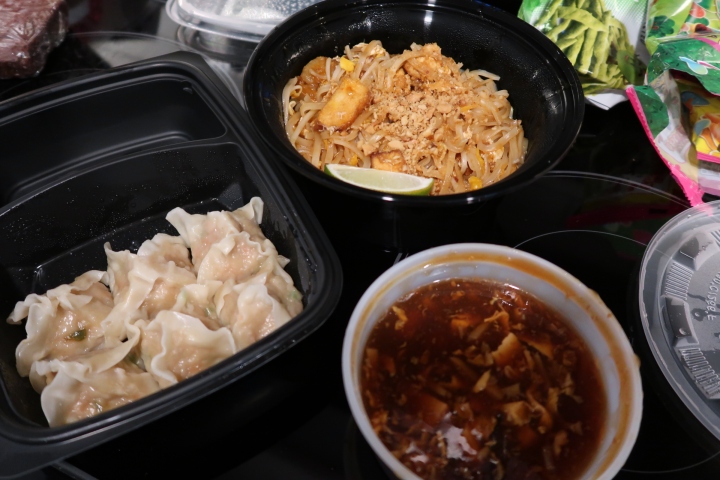 Since my usual Sunday place is closed (wahhh) I decided to give PF Chang’s another shot after more than 10 years. And I am obsessed! They have Shrimp Dumplings now which is amazing. Their Hot & Sour Soup is the kind I like and of course they offer Pad Thai which I’m almost always in the mood for so yes, perfect substitution! 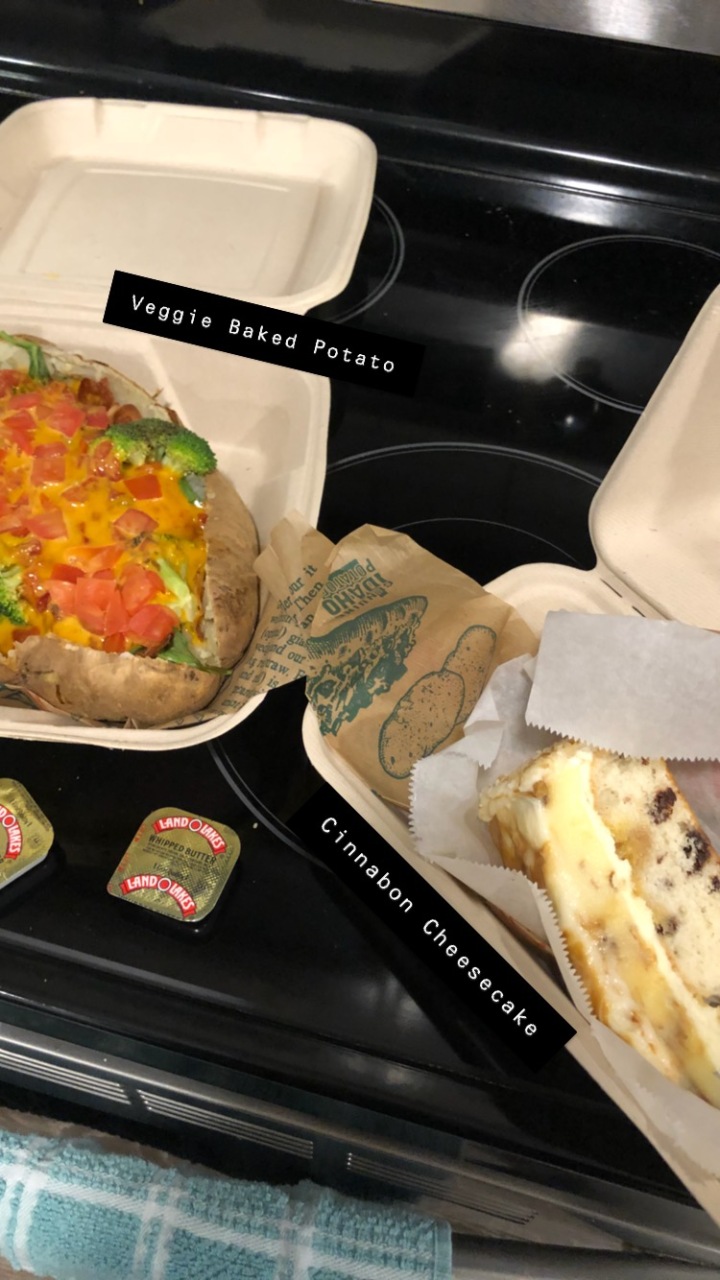 I’ve also went back to ordering my giant Baked Potatoes I like from McAllister’s Deli! They now have a Cinnabon Cheesecake which is amazing!

I’m trying to incorporate more Tofu, Spinach and Broccoli in my meals. For Iron purposes.

I discovered a new salad from Trader Joe’s I’m in love with. It’s their Crunchy Slaw salad. I’m super picky about my Peanut Sauce but this one is my definition of perfect. 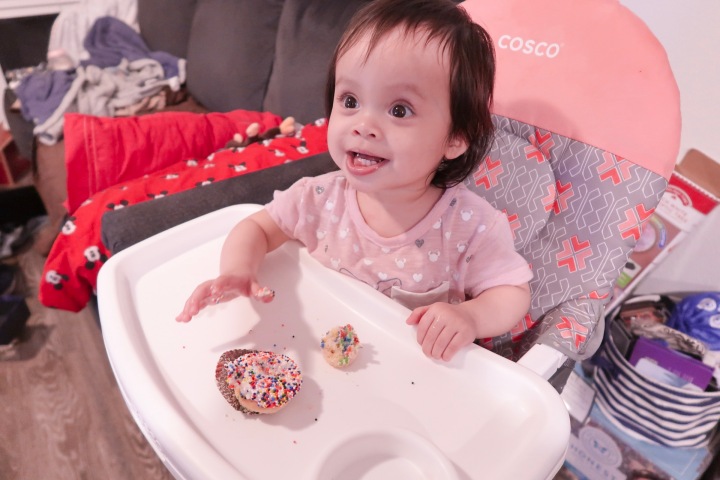 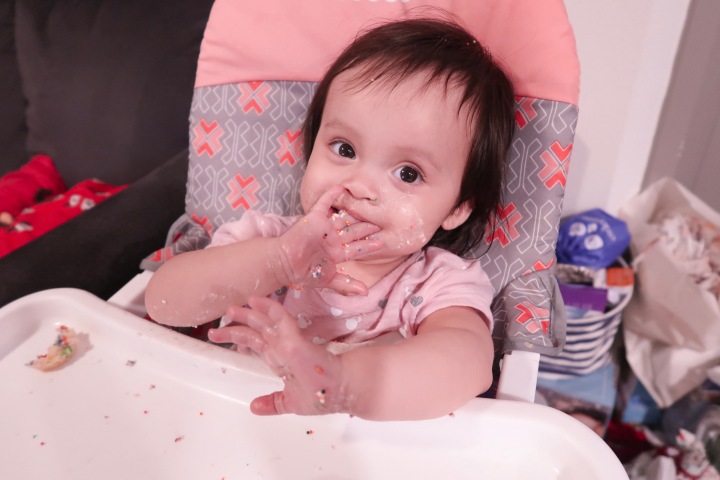 Tums had her first Sprinkles Cupcake and seeing her reaction was my favorite part. How she always ends up with frosting in her hair? I will never understand. Babies are a trip when they eat table food.

And of course Tums turned ONE! We had originally planned a staycation for her but because of everything going on we ended up having to cancel, sadly. Party City was also closed so I had no idea what to do. We did find out that Tom Tumb (owned by Safeway) had birthday balloons so I spent about $50 trying to surround her with balloons. I also got her a number cake (finally), a crown with the number 1 on it which was from the same place where I got her half birthday hat from, a smash cupcake from Sprinkles (since I couldn’t get her a smash cake) and made sure to incorportate noodles as a request from my mama for long life.

I wasn’t able to do as much as I had wanted to do for her and a part of me feels like I didn’t do enough. Granted my birthday party for her won’t be until November when my family finally gets to meet her. I’m bummed Bubba’s family threw her a party knowing I wasn’t going to show up and I feel like they threw a better celebration for her than I did. I wasn’t able to buy her a gift at the end of the day but they got her a ton of gifts and I don’t know, maybe it’s just me, but it made me feel super small and inadequate. Just something I’m going to have to deal with I guess.

Beyond that I’ve been dealing with a lot of anxiety and stress and I’m not entire sure why; I just know my anxiety has been super acting up and I’ve been getting hot flashes like crazy. I don’t know if it’s the increase in meds or what. But I just feel so tired and groggy and just… foggy lately. I’m trying to stay as productive and as inspired as I can…

But I’m going to try and surround myself with things that make me happy and order myself some Edible Arrangements. And just hope for the best, I guess.

How was your March?

Welcome to my (one of many) little spot on the web.

I’m Hazel; a first time mom coping with postpartum depression along with mild anxiety and depression (the last two came wayyy before pregnancy).

P + P was created as a place where I could talk about gaming, travel, Disney and mental health.