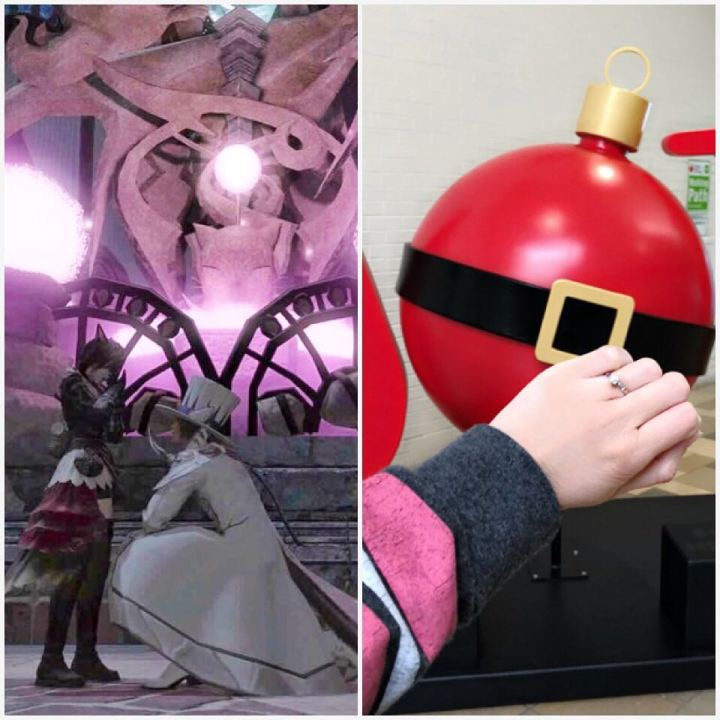 If you told me 2 years ago that this boy would be everything I had ever dreamed of and more. That he’d drop to one knee in real life some day and ask me to marry him, I probablyyyy wouldn’t believe you. But since our FFXIV wedding in 2016 he’s never treated me as anything less than a wife.

He is the most compassionate, patient and selfless man I’ve ever met and I am beyond excited to be spending the rest of my life with him.

Bubba decided one morning to call my mom and ask her for permission to marry me; I thought he was kidding. I mean, he’s called my mom before and we talked about getting married pretty much our entire relationship but for some reason I still kept thinking he’s kidding.

He promptly called my mom and asked her for her permission. He had originally planned to ask her in person and the baby shower we had planned to have in my hometown was when he was going to ask her but because of time frames, that idea wasn’t going to work the way we wanted. On top of that my mom had asked Bubba to talk me out of having the baby shower in California so instead we planned to go to Disney instead. My mom was worried I was stressing out too much about it and she was worried no one would show up and my feelings would be hurt. I understand both her and Bubba’s concern so as much as I was sort of looking forward to my baby shower back home, I also understand.

With that out of the way I figured he’d propose during our Disney vacation or some time in December… somewhere that held a memory to us or something. He’d shared his over the top ideas with me previously and other ideas he had. So I figured it could be ANYWHERE.

One day he joked he was bringing the ring with him to work — he had joked about it before and I just brushed it off.

But this day he came over that night since it was a Friday and he stormed into my room in his street clothes (I have OCD so the fact he was in the room with street clothes set off my anxiety a bit; he knew this but don’t worry he tried to take my mind off of it), got on one knee right next to my bed where I was laying down about 20% asleep and all these words were just tumbling out of his mouth that I CANT FOR THE LIFE OF ME REMEMBER NOW and I’m slightly upset that I can’t! I hate when I can’t remember things!

I’m more curious to know when he got time to resize the ring that was passed down from his mom; it’s not my permanent engagement ring but it is nice to know that his mom had him pick one out for me and that it was passed down from her. It helps me feel like I’m accepted in the family a little bit more. And though the ring is smaller than what I thought it would be, the more I look at it the more I love it and its simplicity. Bubba loves the fact that I wear a ring that’s from him and he always tells me I look 10x more beautiful with a ring on my finger lol! I’m also curious to know why he picked RIGHT THEN AND THERE. I know waiting is something he’s both good and awful at.

Tbh we were both getting a little impatient.

The only thing that sort of sucked is that he had posted it on FB and while we got a ton of congrats his younger adopted sister who had already said negative shit about my blogs and various other things had the nerve to ask if it was “foreal or just some Facebook thing” when Bubba himself NEVER even posts on FB to begin with. Nor are we the lame ass type to say we’re ENGAGED if WE’RE NOT. We’ve been together for OVER TWO YEARS and for someone who’s an adopted sister, she knows nothing about his life or him it seems. Kinda sad. I had voiced her response was rude to which she basically told me I was trippin and so Bubba had responded to her further instead. Most people would just say congrats and move on; like why ruin someone’s happiness post? Some people just don’t make any damn sense! Then again she sits there begging for a ring from her baby daddy on FB when he doesn’t even have a FB, again. Kinda sad.

It’s crazy, just in general seeing how many people AREN’T happy for you and AREN’T cheering you on in your life when you either get engaged/married or/and pregnant.

I’ve definitely been experiencing my fair share during both of these joyous occasions but I guess people who are so bitter with their own lives will always spread their negativity.

I’ll be here, loving my life instead.

Hello! And welcome to my spot on the web where I talk about mental health, Disney, lifestyle, travel and various other random things!